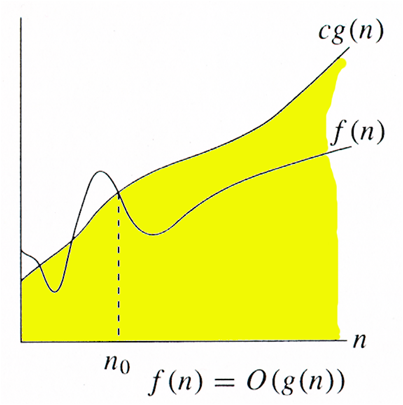 What is Asymptotic Analysis and how to calculate it?


In mathematical analysis, asymptotic analysis, also known as asymptotics, is a method of describing limiting behavior.

As an illustration, suppose that we are interested in the properties of a function f(n) as n becomes very large. If f(n) = n^2 + 3n, then as n becomes very large, the term 3n becomes insignificant compared to n^2. The function f(n) is said to be "asymptotically equivalent to n^2, as n → ∞". This is often written symbolically as f(n) ~ n^2, which is read as "f(n) is asymptotic to n^2".

2) Nested loops: Analyze from the inside out. Total running time is the product of the sizes of all the loops.

3) Logarithmic complexity: An algorithm is O(logn) if it takes a constant time to cut the problem size by a fraction (usually by 1/2). As an example let us consider the following example: